Man gets stuck inside sex doll and calls for help, what happens next will leave you in stitches

An American man got more than what he bargained for in a recent incident as he had a really embarrassing moment when he got stuck inside a sex doll and had to make a distress call to 911. When police arrived, they filmed the process of trying to get the man unstuck and it’s extremely hilarious to watch.

The man, simply identified as Andrew, is seen on his bed, begging the uniformed officers who responded to his call, not to call for more help, obviously out of embarrassment. But the officers informed him they needed to as they couldn’t extricate him from the sex toy on their own.

“If you don’t want to be judged, don’t call the sheriff’s department,” a male officer replied in exasperation.

The officers had to ask him some uncomfortable questions in order to figure out a way to help him.

“Are you stuck inside or under,” a female officer asked.

Andrew replied: “A little bit of all that.”

The male officer then said in a cheeky manner: “Can I ask you a question, man to man? And I don’t know her very well (referring to the sex doll). Are you going in the front or back cos I honestly can’t tell.”

Andrew replied: “Right now, I’m doing the front ’cause I already, I sort of messed up the back a little.”

It’s hard not to laugh at this point as the male officer inhales audibly, then exhales and asks him, “sort of messed up the back?”

To which Andrew replied: “I’m getting judged so completely.”

The male officer then faced the camera and said: “Kids at home, in case you’re watching, there’s a whole lot of predicaments in the world you can get out of with a simple understanding of some physics and some chemistry. So what’re you gonna do?” 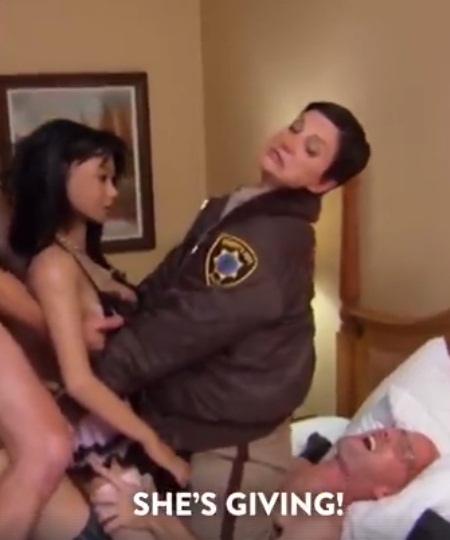 The officers then warmed up their hands then tried to force the sex doll up. Andrew screamed out in pain at this but it didn’t work immediately. After so much effort, they finally succeeded in freeing the man.